This had been on my “to do” list for months, and I finally did it. My plan was to run from Twickenham to Windsor along the Thames Path and then get the train back after refueling in a local cafe. 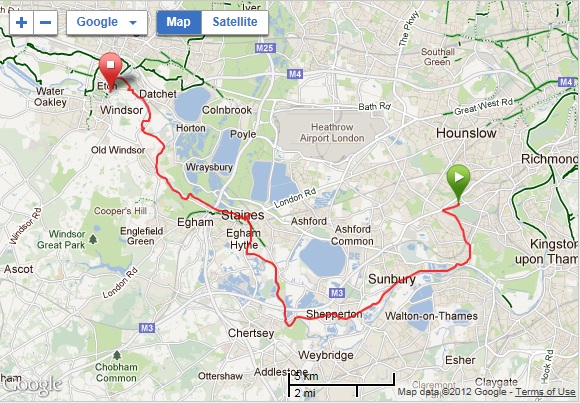 I left home at 8:00am Sunday morning, fully wrapped up with hat and gloves and 1.5 litres in my Camelbak along with Clif bloks and bars. It was just light so I didn’t need lights. I wore my new Luna ATS Sandals with Toe Socks for a bit of extra warmth (I’ve been running in Luna’s for over a year and love them).

As the Thames Path is on the south side of the river it was road running till I got to Shepperton (1.5 hrs) after which I joined the Thames Path when it crossed to the North bank.

Once on the Thames Path it was a nice scenic run past boats, rowing 8’s, loads of wildlife and some rather nice houses that back to to the river. It was hard to believe this is the same river that flows under Westminster bridge.

The Thames path crosses banks a few times which gave me a chance to try and remove the mud that was building up on my sandals as the morning started to warm up by stamping as I went over each bridge. I saw a few runners, and later on walkers on their Sunday morning walk (probably an attempt to justify the enormous Sunday lunch they are having later).

The muddiest bit was around Runnymede where I had to check I was still on the right track as Thames Path signs seemed to be few and far inbetween (and poor 3G signal meant my iPhone maps weren’t that useful).

After Datchet it was good to see Windsor castle appearing in the distance after a few large loops of the river which finally bought me into Windsor. I left the path at the bridge which is just behind the Windsor & Eton Riverside railway station.

View from my late breakfast

The discovery of a cafe by the bridge resulted in well earned “bucket” of Earl Grey tea and a wonderful bacon sandwich, before getting on the next train back to Twickenham.