It all started one evening in November 2011 in a Girls school, near St Paul’s Cathedral in the City of London. I had started running in VFFs, moved to Luna Sandals, read “Born to Run” (not the normal order of things I gather from other running folk) and was now sat with several hundred people in a school hall, listening to a tall, shy, tanned guy talking about two subjects that were clearly very close to his heart, Tarahumara and running. I had taken my then 16 year old son Sam along, not because he was a runner, but because he had read “the book” and wanted to meet Caballo. 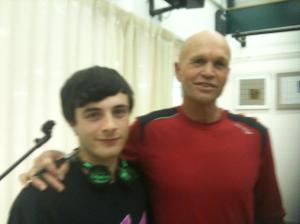 By the end of the evening the race had moved to the top of my “bucket list” and despite Caballo trying to persuade me to run in 2012 I insisted I needed to run an ultra first so would run it in 2013, after which he referred to me as the “2013 guy”.

So after a couple of ultra’s in 2012, February 22nd found me on a flight to El Paso with all my running kit in my hand luggage and the stuff I could afford to lose in the hold.

I had booked a place on the “Diego shuttle” so was spending 2 nights at Motel 6 before departing for Paraiso del Oso midday Sunday with the rest of the travellers. I was also due to be sharing a room in Motel 6 & Urique with a Scotsman I had never met (aside from Facebook) who judging by the way he typed in Facebook probably sounded like “Groundskeeper Willie” from The Simpsons.

Fortunately Graham and I hit it off from the start, and as we loaded the vans and then squeezed in to the back seat of the van along with Graham I had no idea of the impact the trip would have on me, never mind the impact on Graham! 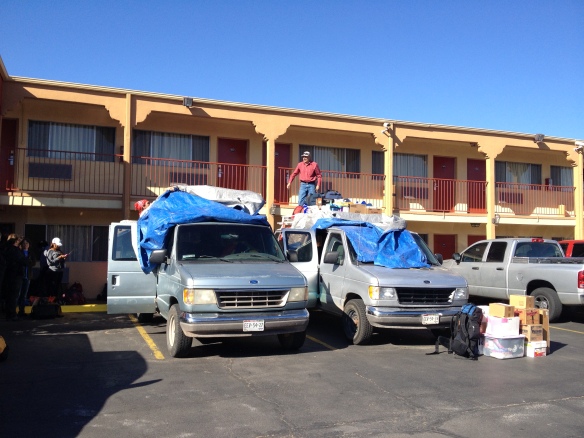 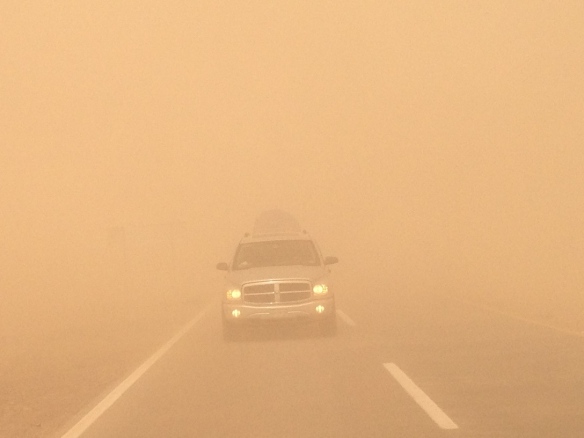 Cautemoc Hotel (our overnight stop on the way to the canyons) 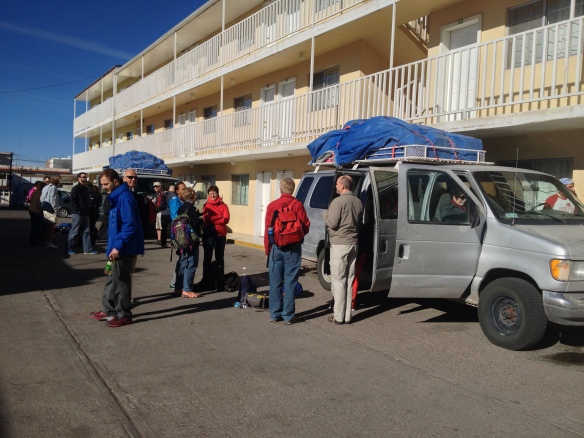 I didn’t realise the altitude we were at (6,400 ft) and how cold it would be in the morning (yes that is ice not some kind of flower) 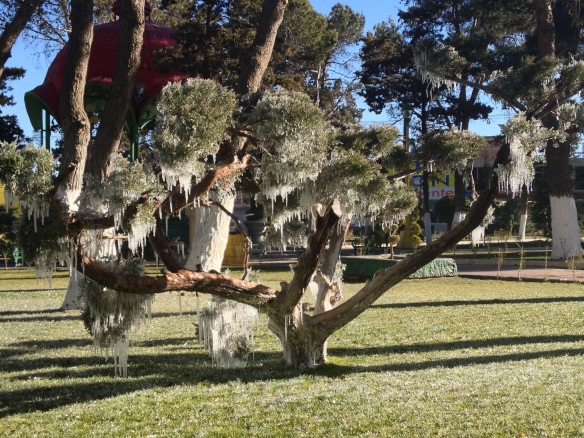 We stopped at the Divisadero Cable Car & Zip Line for a couple of hours although I wasn’t brave enough for the Zip line. Instead a group of us took the cable car down and walked a trail for a while. 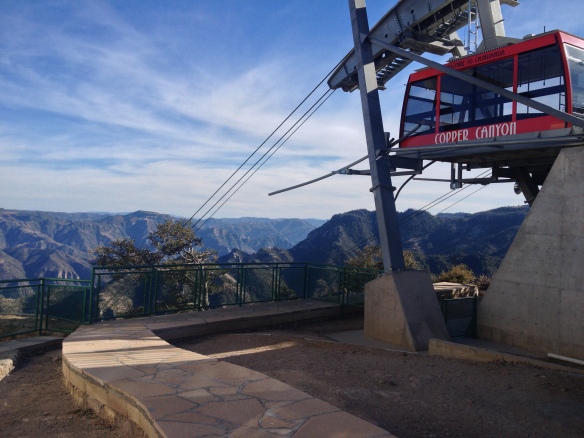 Christelle and I returning back to the cable car after a walk along Tarahumara trails. 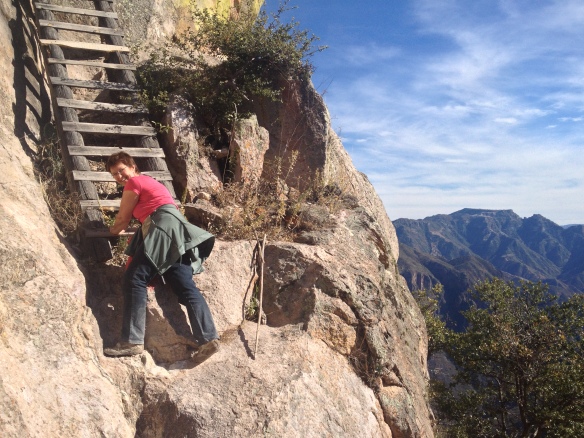 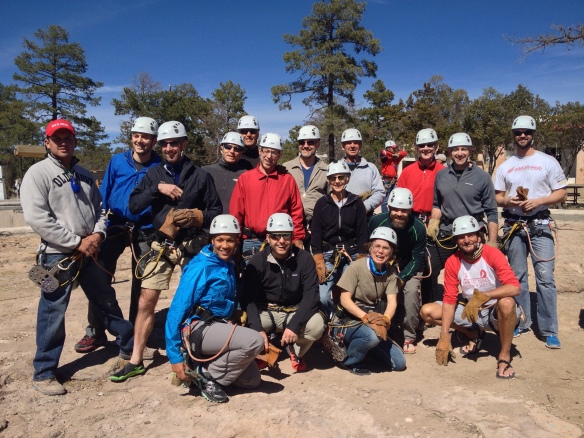 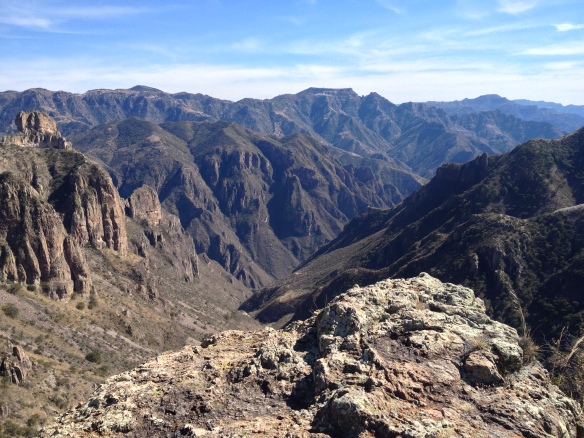 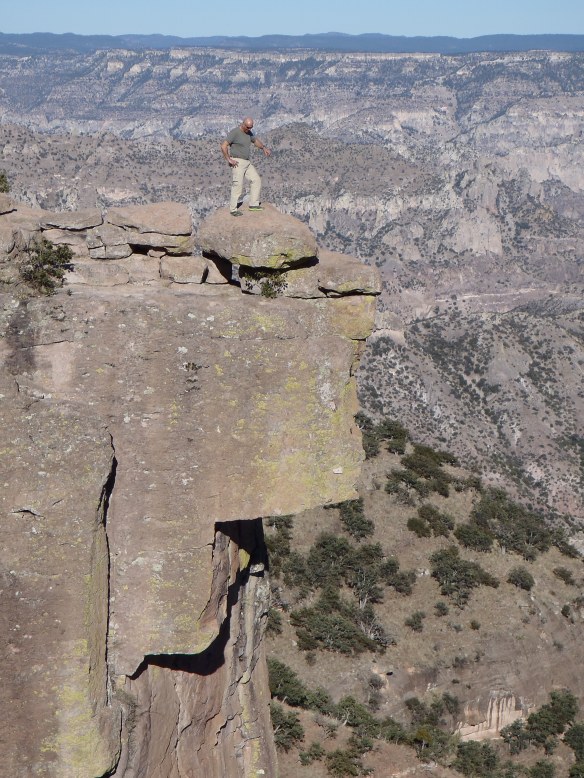 We finally reached Paraiso del Oso and were well looked after during our stay and were grateful for the work and coordination Diego had put into making this trip possible. 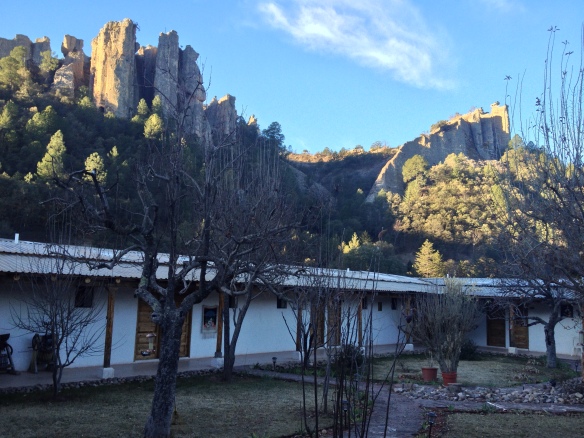 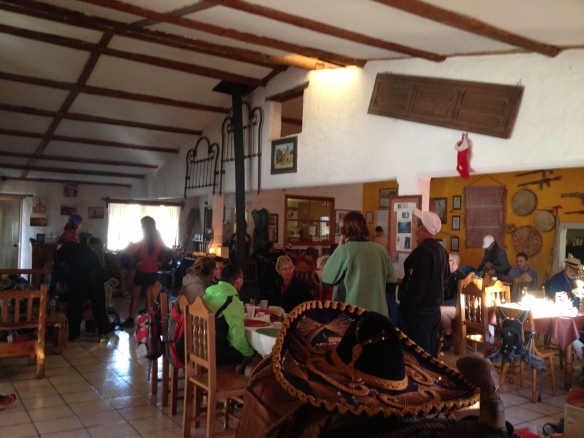 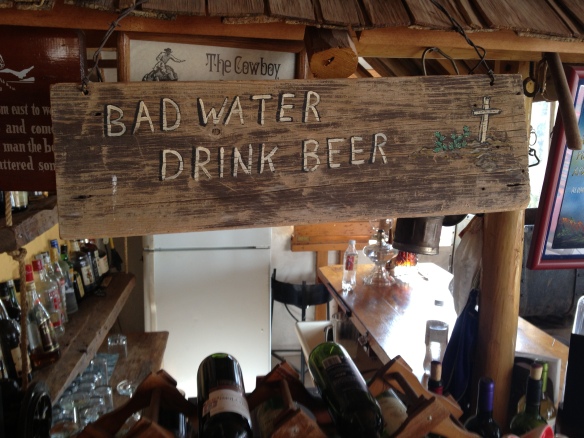 My first ever Margarita, alas swiftly following by 6 others after which I had to lie down! 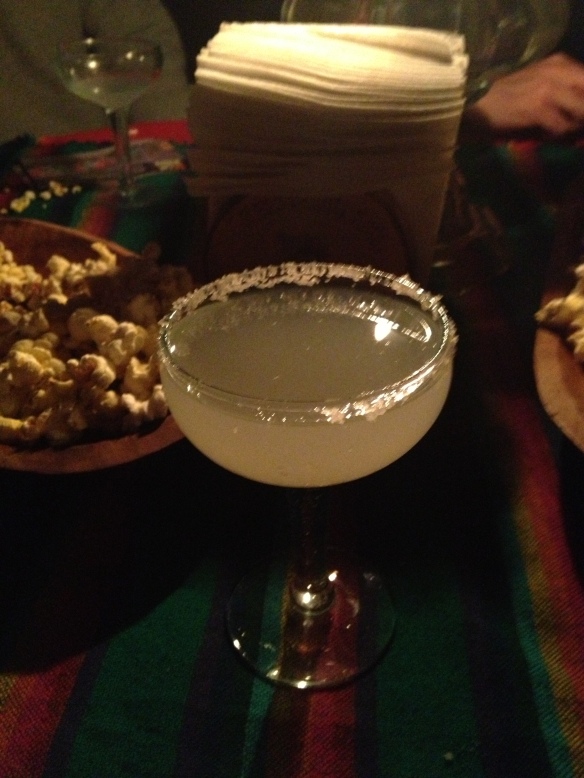 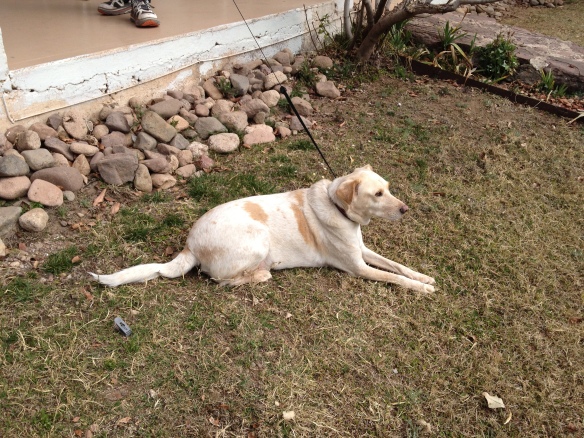 We visited a Cerocahui Tarahumara Boarding School providing a BBQ, games and I set up a Webcam I brought with me. 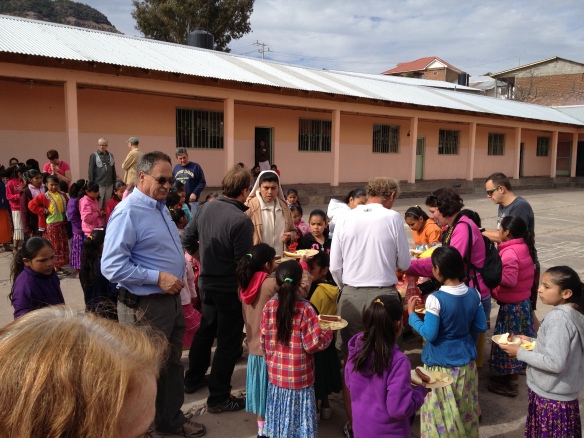 The girls sang a song to thank us.

For the 24 mile hike down to Urique we had local guides who looked like they were going on a 10 minute stroll to get some milk, where as we seemed to be carrying enough supplies and water for a month!

A touching moment as we were about to cross the bridge on the 24 mile hike down into the Copper Canyons and Urique. Maria and Luis made us take Caballo’s ‘if I get hurt lost or die, it’s my own damn fault’ oath. Luis said that what we were about to undertake would change us, and I believe it has, particularly for 2 people on that hike (you know who you are) the Tarahumara phrase ‘Kuira-Ba’ is beautifully relevant. 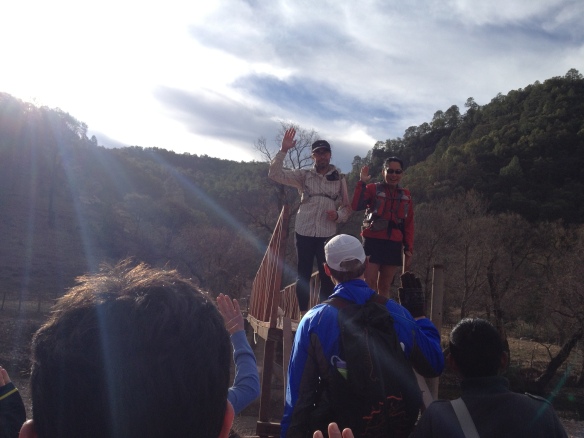 At 55 I was expecting to be on the upper age group on the trip, and then I met Toshio who at 72 years old (and 250 Ultras to his name) gives us all something to aspire to (and he is always smiling)! 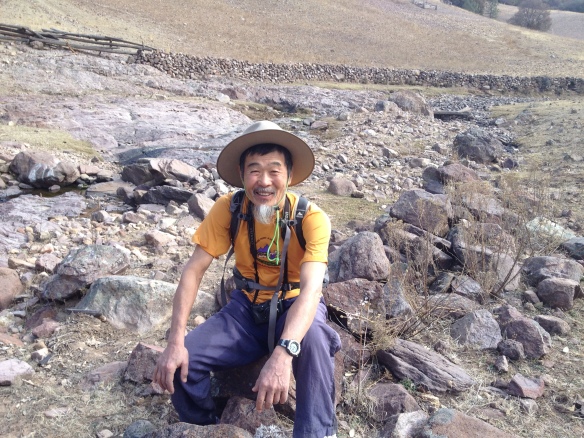 It was sometime after the hike that I started to see less of ‘Graham’ and more of ‘Graham + Kate’ and I was usurped from my ‘Scottish to American’ translation duties’. I fully understood why, as fair Kate had far better legs than me (a fact I was able to confirm frequently over the 32 miles of the race on the following Sunday) 😉

On Thursday morning we hiked up to Los Alisos (part of the race course) for a farewell ceremony for Micah. 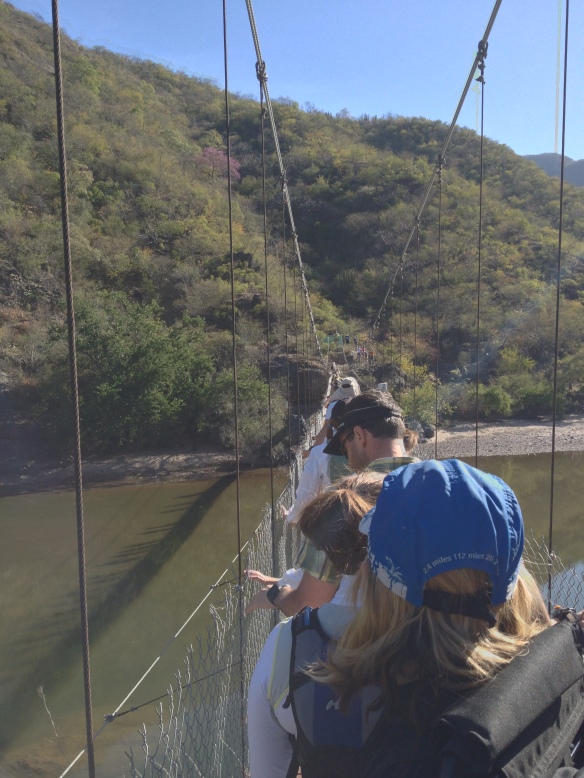 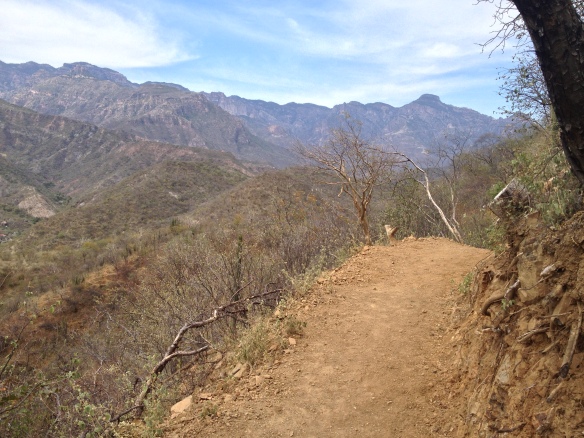 What you can’t see below is the 2nd horse he is towing that insists on taking the inside path, so we ended up edging around its rear end on the drop side (I was getting ready to grab its tail if I slipped)! 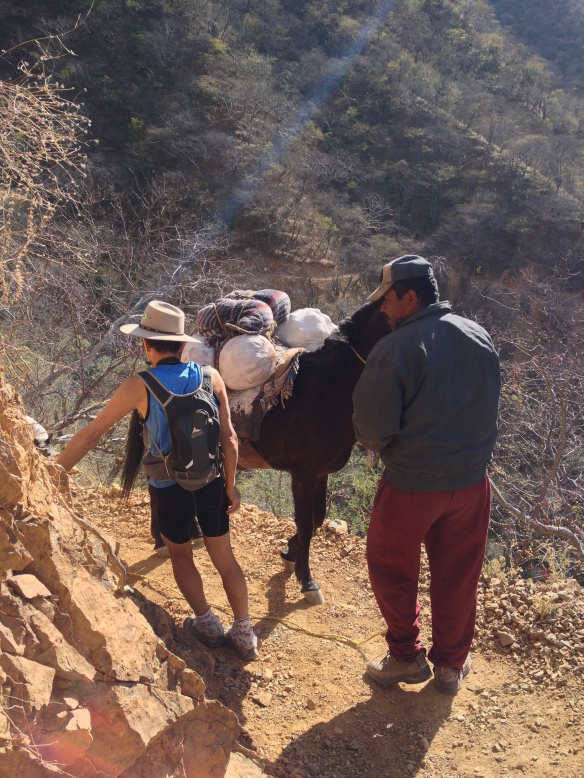 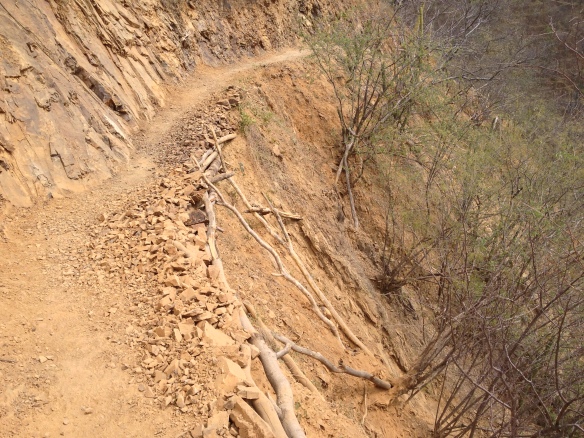 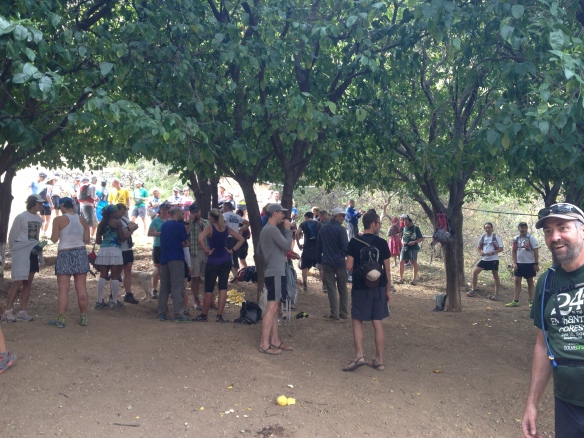 For the ceremony we all formed a circle and Maria passed Caballo’s ashes around the circle for everyone to hold and offer their own silent farewells. After which Caballo’s favourite Mas Loco shirt was burned on a fire and the ashes were sprinkled around his favourite tree and finally on the fire. Memories of Micah were spoken and it was a moving experience for all.

I managed to keep in together until as we were leaving I hugged Maria, who thanked me for making the trip and said she was glad I came, after which the emotional wheels came off and I had to hurriedly head for the trail whilst trying not to blink!

Thursday afternoon we drove to the top of the canyon to Cabañas San Isidro for a Temazca (ritual sweat lodge) where 14 of us sat in the dark in a small hut whilst red hot rocks were shovelled into the pit in the floor along with water sprinkling and herbs of various types added to the heat. After around an hour we left the lodge and stood around the fire outside in silence for a while and the dark. It was quite eerie as no-one felt the need to speak. 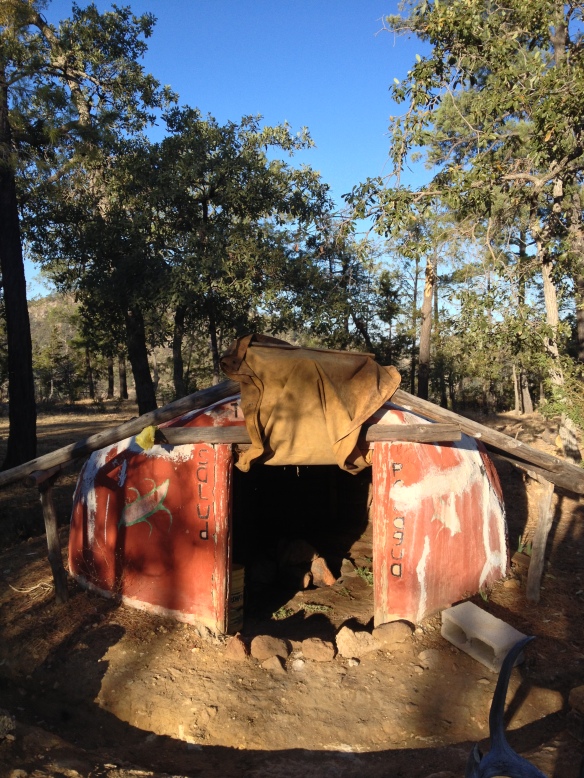 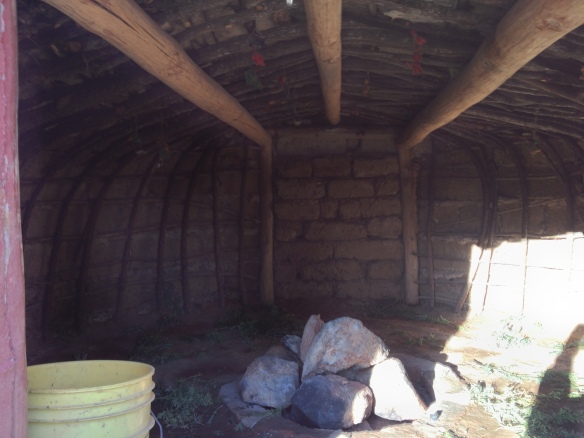 The ride up to the top of the canyon I found very traumatic as the road is very rocky, narrow, sheer drops and the driver was on his mobile for a fair bit of the journey! On the way back down I was blindfolded and playing music loudly though my headphones (Sensory deprivation rules ok).

Friday evening we were invited to dinner at the Tarahumara camp on the far side of the river. They had butchered several cows and were cooking them in 3 large pots whilst the butchered carcasses were covered up nearby on rocks. 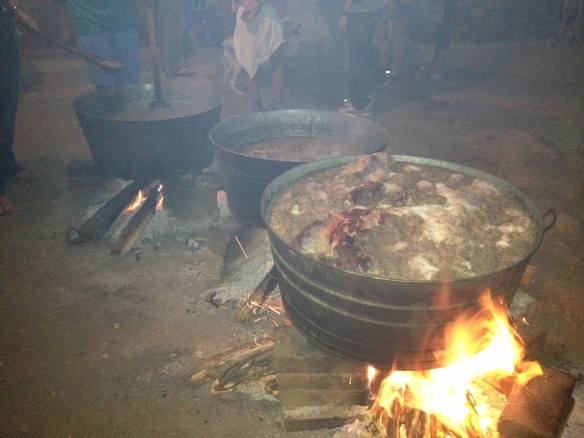 It was a uniquely original evening with local people appearing from everywhere once the word got out about dinner!

This kids race on Saturday was a great success and I hope it becomes a regular event as it was great seeing their enthusiasm. 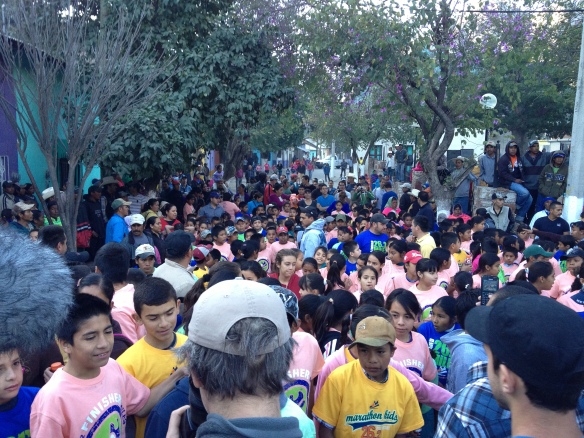 Giving out the medals, water and bags of school supplies was brilliant. 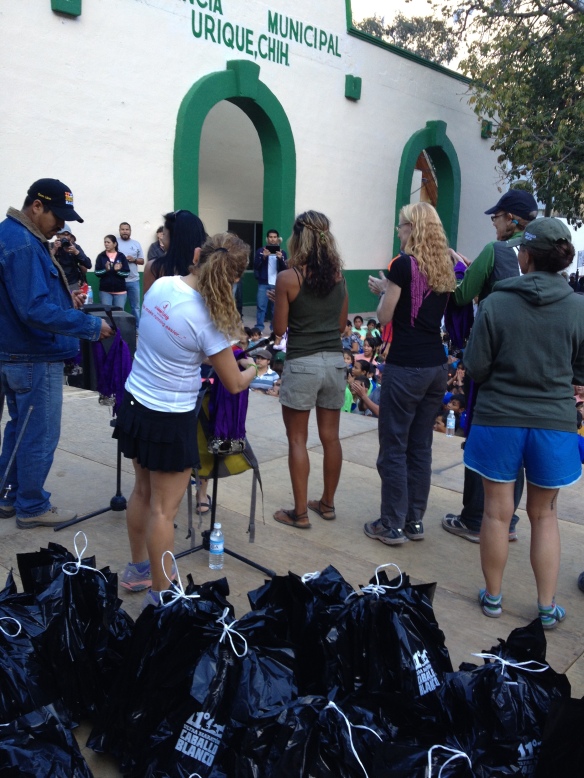 As Kate & I were likely to be running at a similar pace (as in we would be a lot slower than the Scottish mountain goat known as Graham) we decided to run together.

Graham stopped for a hug on his first return from Guadalupe and still finished in 10 hrs 30 min! Makes you sick doesn’t it (though on second thoughts if I was offered a hug by Kate I’d probably stop too!) 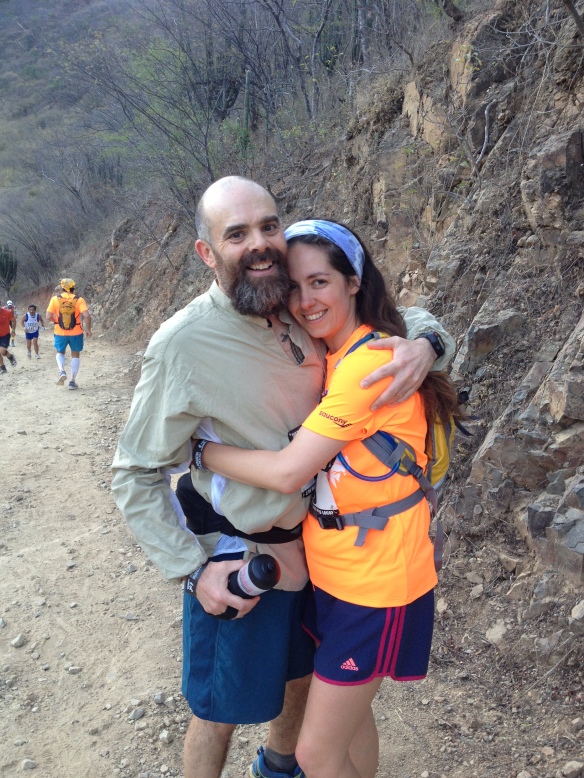 We were going ok (slow, but ok for Brits not used to 97 Degrees F) until we reached the bridge to Los Alisos after 8 hr 45 min where we were told that there was no water at Los Alisos. Now so far we had each consumed around 12 litres of water (and probably poured a similar amount over our heads), eaten 24 S-Caps each and decided to just stop for 5 minutes before continuing. We filled up our Camelbaks, thought about the run up to Los Alisos (I had done it on the Thursday so knew what was involved) and that our water would just about last us to get there (if we drank it rather than used it for cooling) but we would be coming back dry and couldn’t guarantee the water at the aid station by the bridge (where we currently were) would still be open. In addition we would also have missed the Urique cut off by a number of hours as well.

I kept remembering (as did Kate) the bit of “Born to Run” where Barefoot Ted runs out of water and drinks bodily fluids, so we had a vote and decided a cold Tecate was infinitely more preferable to the warm alternative, so we heading back to Urique to finish 32 miles and still an Ultra!

Just outside Urique we were greeted by Graham walking towards us carrying 2 cokes, I almost hugged the Scotsman, but instead got Kate to give him an extra hug on my behalf.

It was an incredible day and one none of us will forget for a long time. 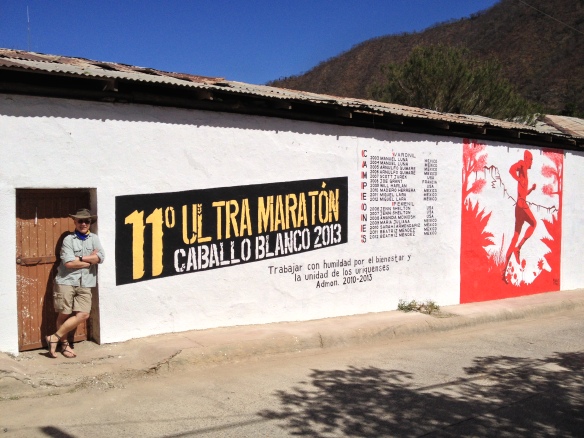 So the big question, will I return to Urique to finish the outstanding 18 miles I missed this year?

Yes I will, but I’ll probably leave it a few years and maybe time it for a special birthday. So maybe I’ll see some of you guys in 5 years time to celebrate my 60th birthday! Knowing my luck Toshio will be there and still thrash me as a racy 77 year old!

For me 2013 was the important event, and I fulfilled a promise I made to a friend who is no longer with us.

Where my readers are